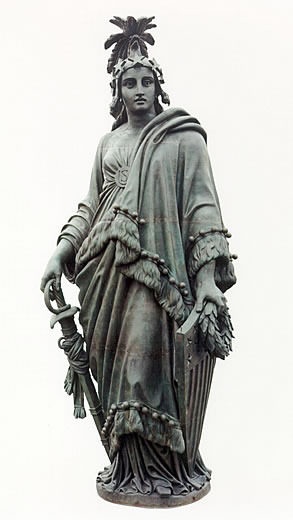 A GENEROUS DONATION PROVIDED BY THE MASONIC CHARITY FOUNDATION OF OKLAHOMA CREATED THIS INSTITUTE IN SPRING 2010.

The Institute’s specific tasks include:

In addition, the Institute’s “Dr. J. Otto Pohl Collection” is named after a fellow member and contains a significant number of Germans from Russia documents and publications of a primary and secondary nature in the English, German and Russian languages in both print and digital formats.

Explanation of the NWOSU ICS Logo

[NWICS Statue Logo] The symbol used by the Institute has appeared under a variety of names, including “The Statue of Freedom,” “Armed Freedom,” “Freedom,” or as she was originally called, “Freedom Triumphant in War and Peace.” An allegorical figure representing the concept of Liberty, it was selected to stand on the Dome of the United States Capitol because of the inclusive nature of her physical style and esoteric meanings. Her design, for example, incorporates both classical Greco-Roman and American Indian dress as well as the combination of war and peace motifs. As such, she represents both the Old and New Worlds. This figure also incorporates a number of other important features. First, she faces east toward the main entrance of the United States Capitol to symbolize that the sun never sets on Freedom. Second, the base upon which she stands is inscribed with the Latin phrase “E Pluribus Unum.” Third, the statue is imbued with deep symbolic value because of President Abraham Lincoln’s insistence that the figure be placed on the Capitol Dome in 1863 to commemorate the eventual reunification of the Union. Thus, all of these factors together make the statue a fitting symbol for the concept of citizenship.

http://www.archives.gov/exhibits/charters/declaration.html (National Archives Website on Comstitution and Declaration of Independence)