At the heart of Northwestern traditions is the fall homecoming event. The Alva community, Northwestern alumni, current students, faculty and staff, as well as prospective students and bands from surrounding areas join in celebrating the Ranger family. Homecoming events such as the Miss Cinderella Pageant for high school senior females, the homecoming parade, band and parade float competitions, Ranger Royalty, and more are all funded strictly through the purchase of Northwestern’s annual themed homecoming button.

Directly after Parade Across from Rialto

Funds from the sale of Northwestern’s Homecoming Buttons are the main source of income for Homecoming.

The button is only $10 and provides entrance to the Miss Cinderella Pageant competition and Talent Night, the football game, as well as discounts and other incentives from a list of Alva merchants during the week of homecoming; it’s more than a $35 value! Each homecoming button is numbered and has a chance to win $500 in Alva Chamber Bucks. This year - the wearer of the winning button could win $1,000 because no winner was found last year! The winning button will be drawn during the homecoming football game, and the drawn number must be present to win.

All patrons MUST be wearing a Homecoming button during the week of Homecoming to receive the discounts! For Homecoming, merchants from the area will offer the following discounts:

Current Theme: “Together We Ride”

Have an idea for next year's homecoming theme? Submit it to our committee with the online form: Homecoming Theme Entries

Would you like to nominate someone for next year's homecoming parade marshal? Submit your nomination to the homecoming committee using our: Online Homecoming Theme and Parade Marshal form.

Parade Marshals through the years

Since its inception, the Miss Cinderella Pageant has provided a means by which outstanding high school seniors can compete in a worthwhile pageant for both honors and awards of scholarship. This scholarship pageant takes place on Thursday and Friday of Homecoming week, followed by the parade on Saturday at 10 a.m. in Alva’s downtown square. The pageant has grown in size and significance in northwest Oklahoma and towns along the Kansas and Texas borders.

The winner of the Miss Cinderella title receives eight semesters of tuition and a one-year room waiver at Northwestern's Alva campus. The first and second runners-up receive six and four semesters of tuition, respectively. The winners of the talent and congeniality titles each receive a one-year room waiver in addition to the one-year tuition scholarship that each contestant receives. Miss Cinderella Scholarship Information

A contestant must be a true high school senior female, single, and at least 16 years of age by September 1, 2022. She must never have previously entered the Miss Cinderella Pageant. For a full list of requirements download the entry forms, rules and guidelines below.

What is Miss Cinderella? 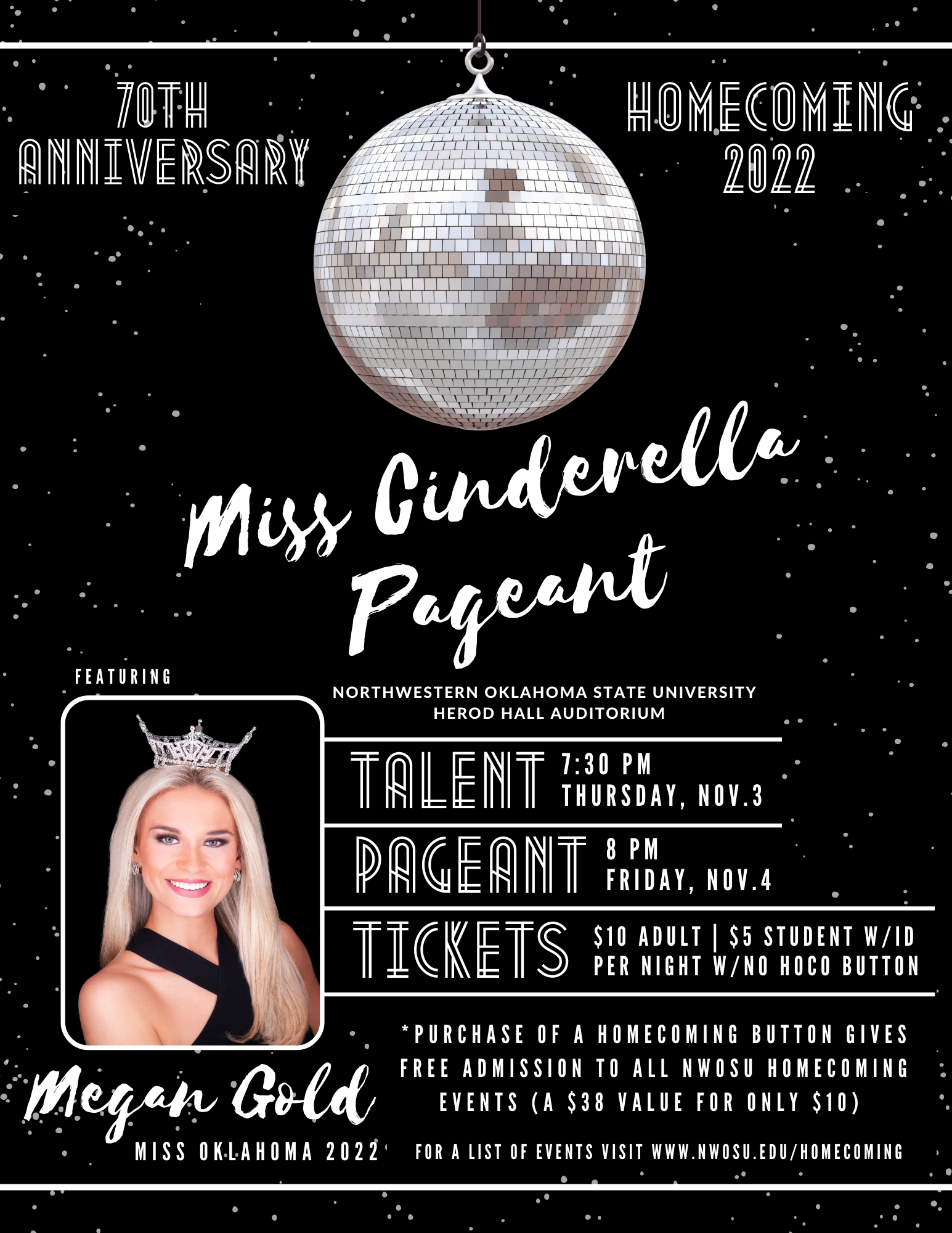 Every year the Alva community and merchants, as well as many of Northwestern’s alumni, academic departments and student clubs create theme-centered floats to be featured in the Homecoming parade. If you are interested in participating with a float please fill out an entry form, download and read the float rules for your category and the float building workshop. Float categories are broken down into: campus clubs and organizations; off-campus commercial business; and off-campus non-profit organization.

Deadline for float entry forms is Wednesday, Nov. 2, by noon

Below you will find the online float entry form OR a fillable PDF document that can be emailed or printed and sent to Mrs. Shannon Leaper. You are required to download float rules below which disclose information on where floats can be built, float specs and more.

Float Rules per category are found below:

The Northwestern Alumni Association sponsors the annual Ranger Run, which is held on Saturday morning of Homecoming. The 5K Run and 1 Mile Fun Run begin promptly at 8 a.m. in front of the Rialto Theater on the downtown square in Alva. Registration begins at 7:15 a.m., and official Homecoming T-shirts are given to each paid entry.

All participants will receive a medal. First place in the men’s and women’s division for both the 5K and the 1 Mile Fun Run will also be awarded Chamber Bucks.

Participants also may choose to register and pay entry fee by going to the J.R. Holder Wellness Center and speaking with the assistant director, Bailie Gooch (580) 327-8105. 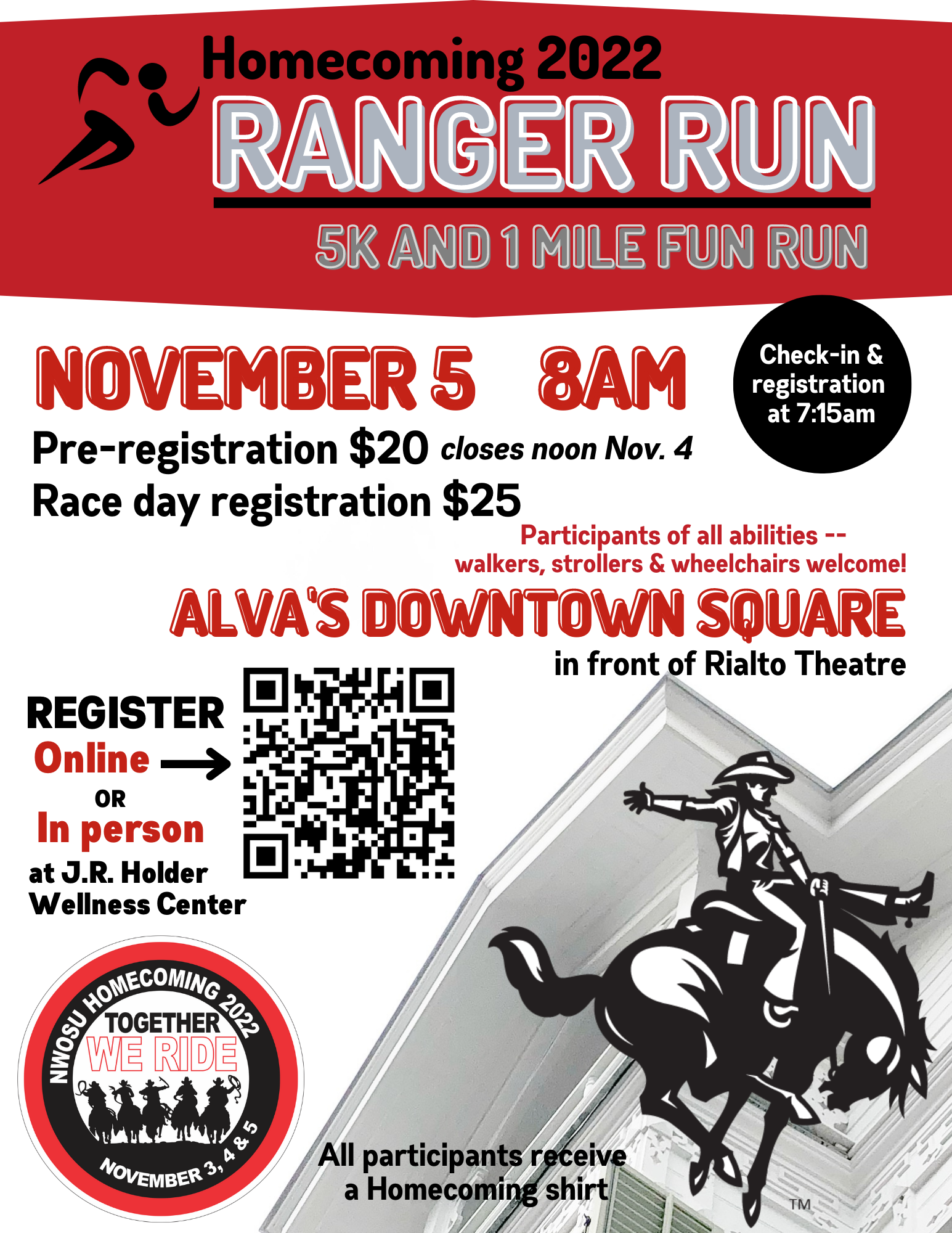 The annual Homecoming Celebration for Northwestern Oklahoma State University in Alva brings alumni and visitors to town each fall during football season. Personnel from Northwestern and leaders in the community join forces to plan the celebration months in advance.

Each year's homecoming seeks to honor the traditions of the past and the heritage of northwest Oklahoma, offering entertainment features that are continued from year to year, but seeking to make each year's schedule unique. Many of those working on homecoming have been involved in its production for several years; others are newcomers to the project this year. All work together to make it a success and a source of pride to everyone in this part of the state.

A scholarship pageant for high school seniors to represent their communities takes place on Thursday and Friday of the week, university students take part in special events on campus all week, and marching bands, floats and other attractions liven up Alva’s downtown square for the annual parade on Saturday. The traditional Ranger football game and queen coronation takes place in the afternoon.

Every year there are on-campus contests and competitions. Entry information for contests can be found below:

For more information on the homecoming contests, sponsored by Student Government Association, contact Olivia Yandel at oayandel@nwosu.edu or 580-327-8105. 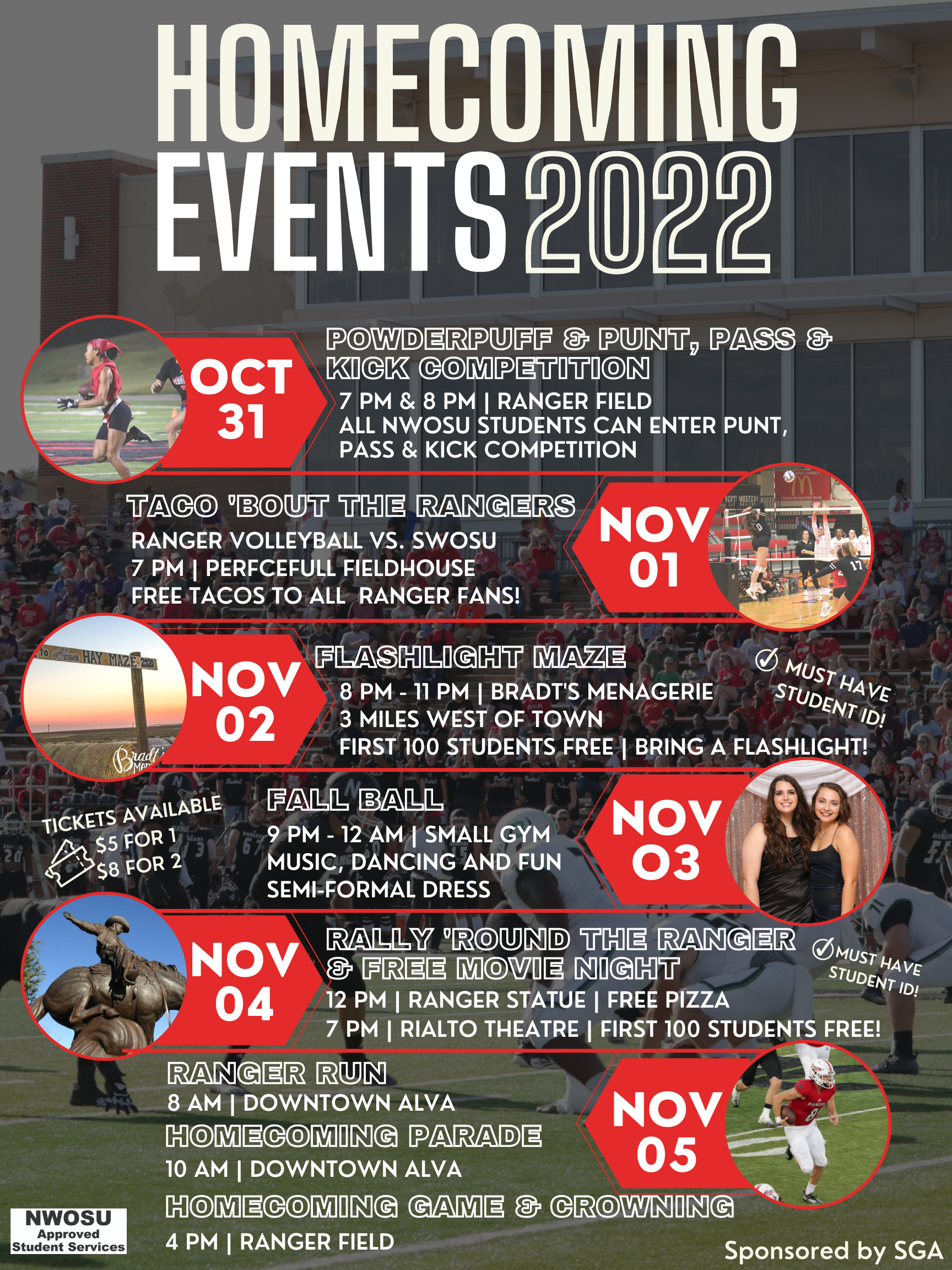 Northwestern Oklahoma State University plays host to the Homecoming parade at 10 a.m. on Saturday of Homecoming weekend. The NWOSU Homecoming Association invites bands to participate in this parade. There are first and second place awards in six classes of competition, as well as offering an open class for bands not interested in competing.

First place winners in each class will receive a $150 award and second place will receive a $100 award. $50 rewards will be given to the overall winner in each caption, such as outstanding drumline. In addition, each band participating in the parade will receive a donation of $75 to help defray expenses. Classifications are as follows:

At the end of the parade, the NWOSU 2nd Line Brass Band will lead a traditional 2nd line procession to the courthouse band stand, where the Ranger Marching Band will perform a mini concert prior to the handing out of rewards.

For more information contact Dr. Michael Black, assistant professor of music and director of bands, at (580) 327-8191 or mcblack@nwosu.edu.

If it’s time for Homecoming, it’s time for alumni to dust off their instruments and join the alumni band. We’re ready to welcome you back on Saturday, Nov. 5, 2022!

Rehearsal will start at 2 p.m. in the band room on the third floor of Ryerson Hall, Alva campus. Game time is set for 4 p.m. Alumni Band Letter

Want to be involved in the Alumni Band? Fill out the form below! Please complete the information and submit by Wednesday, Nov. 2, 2022, in order to reserve a T-shirt in the correct size. More information will follow.

Youth sizes XS-L are $12 each. Only available through preorder.

Wear your homecoming button and receive $1 off your total purchasing order! 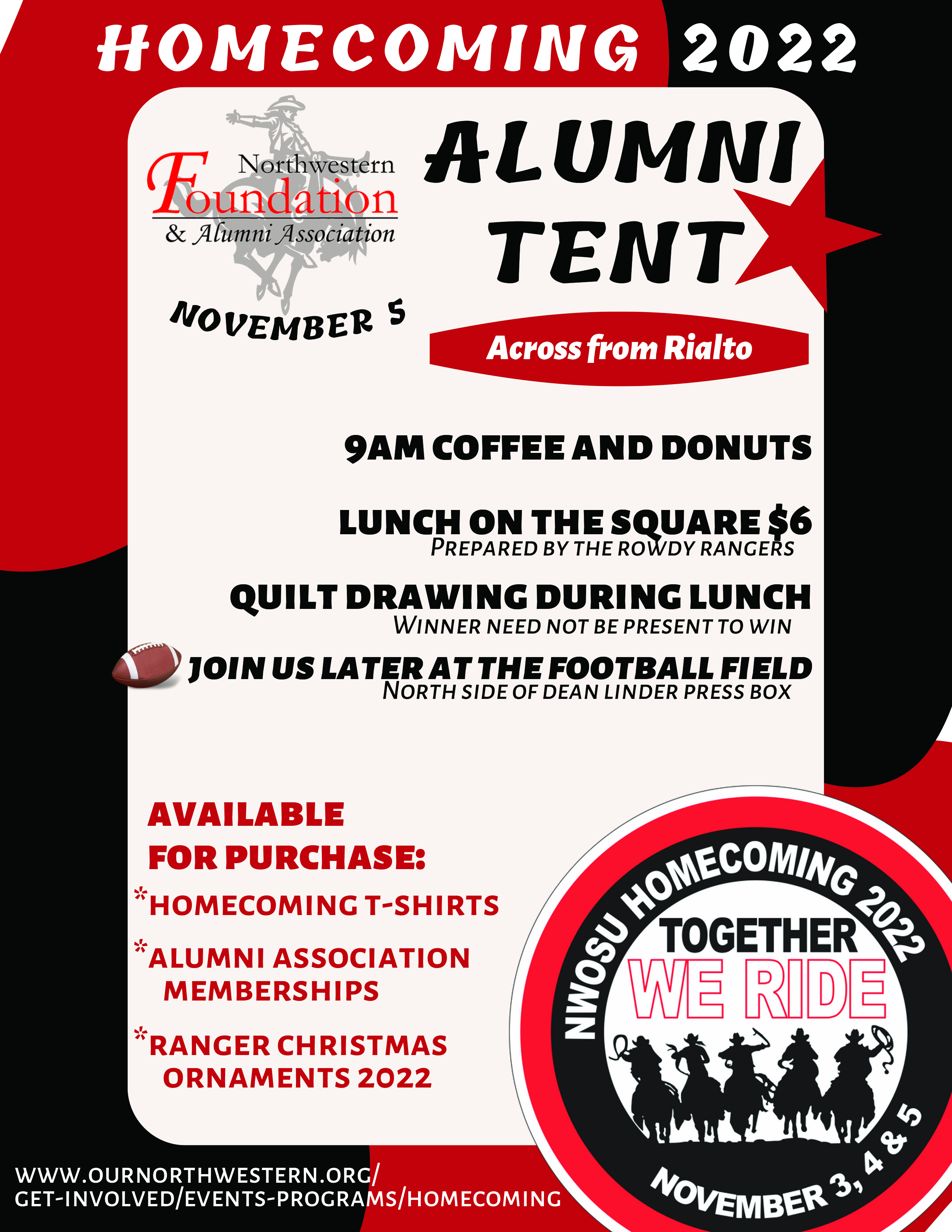 Motels in the area are offering discounts for Northwestern’s Homecoming 2022, set for Nov. 3-5. Reservations should be made by October 28 to get the discount. Be sure and ask for the “Ranger Homecoming Discount Rate.”

Comfort Inn & Suites - $119 plus tax, both single and double

Have questions or concerns? Contact the appropriate homecoming committee member below:

To contact an individual from the committee, please click on his or her name to send an email.

Suggestions for Homecoming?  Please submit them to Erin Davis.

If you have a comment or suggestions you would like the homecoming committee to address please use the online form below: