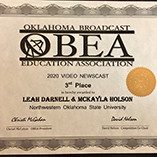 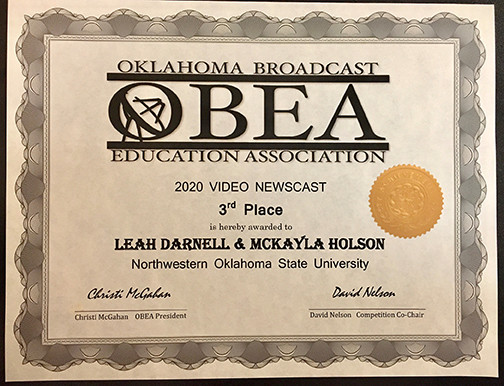 Dr. Luis Rocha Antunes, assistant professor of mass communication, said that he is proud of his students who competed against entries from 12 other colleges.

“They produced the newscast and created all the news packages for my Broadcast News class in the Fall 2020,” Antunes said. “What impressed me the most was their work ethic. They worked very hard and were always very receptive to my ideas and feedback and willing to go back and improve their work.”

Antunes just finished his first year teaching within Northwestern’s mass communication program and has many plans for its future.

He said he has been working on an improved workflow for the campus television station NWTV-7 as well as the campus radio station KNSU.

He also plans to work with students on creating a weekly radio talk show around politics, arts and culture, and sports. The show will include two guests in the studio each week.

In the fall, students will be focusing on a weekly newscast with a more advanced structure and improved graphics. He said the newscast will be produced by his broadcast practicum class and will use content produced in his classes.

“We are going to have a weather section, a sports segment and other news stories about actualities in the campus and the community,” Antunes said. “It’s going to be broadcast to channel 7 (locally) four times per week – Wednesdays and Fridays, morning and afternoon. It is also going to be available on YouTube. And, we are going to take a more proactive stance in advertising our content on social media.”

He also announced plans for his audio/visual production class to work in collaboration with the theatre and music programs to live stream a couple of their concerts with multiple cameras, as well as recording and editing using multicam editing. Students in the class also will work on short-documentaries on one of the theatre productions or on other projects taking place around campus.

He said he also hopes to get his students involved with the theatre program’s 72-hour video marathon, and also to create spotlight videos about faculty and staff with QR codes on their office doors that will open links to the spotlight videos.

To learn more about the broadcast area of Northwestern’s mass communication program, contact Antunes at (580) 327-8465 or lrochaantunes@nwosu.edu.