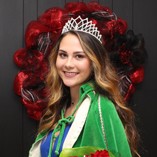 Ranger Royalty King and Queen finalists that will go on to the final round of voting are (pictured left to right) Joel Gonzalez, Jordan Cremers, Bailey Jaye Wilson, Sadie Vore and Demetri T. Wilson.

Northwestern Oklahoma State University held its annual Ranger Royalty Banquet Tuesday following the first round of voting for king and queen candidates. The Student Government Association (SGA) officers announced this year’s Freshman Queen, Kelsi Smith of Burlington, and named the five final candidates for Rangers King and Ranger Queen. The winners for Ranger King and Queen will be announced Saturday, Sept. 30, during halftime of the Ranger Homecoming football game.

Smith is a nursing major and enjoys hanging out with friends, singing and playing sports. She likes to go to the lake with her family in her free time. Her favorite subject is math. She is the daughter of Aaron and Kandi Smith.

The first Ranger King finalist is Joel Gonzalez, a senior elementary education major from Guymon. He is sponsored by Northwestern Cheer team. Gonzalez enjoys being a member of the cheer team and the Student Athlete Advisory Committee. He is the son of Joel and Maria Gonzalez.

The second Ranger King finalist is Demetri T. Wilson, a junior criminal justice major and health and sports science major from Homestead, Florida. Wilson is sponsored by the Northwestern football team and is the student assistant coach for the team. He is the son of Clayrinski D. Wilson and Akiko Wilson.

The first Ranger Queen finalist is Jordan Cremers, a senior social work major from Ponca City. She is sponsored by Social Workers of Tomorrow. Her hobbies include playing with her dog, Izzy; hanging out with friends and going to concerts. Her favorite subject is psychology. She is the daughter of Ron and Michelle Cremers.

The third Ranger Queen finalist is Sadie Vore, a junior elementary education major from Burlington. Vore is sponsored by the Baptist Collegiate Ministry. She is the SGA secretary and enjoys hanging out with her friends and spending time with her family in her free time. She is the daughter of Shane and Shannon Vore.

The other candidate for Ranger Royalty was Yosbelli Lora, an undecided major, from Ringwood running for Freshman Queen.

The second and final round of voting for Ranger King and Queen will take place Monday and Tuesday, Sept. 25-26.

The Ranger King and Ranger Queen Coronation ceremony will take place during halftime of the homecoming football game against East Central University on Saturday, Sept. 30. The game starts at 4 p.m.