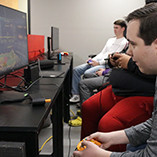 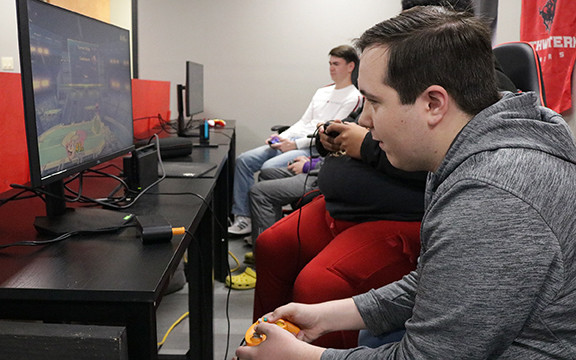 J.D. Cloud, computer science sophomore from Seiling, teams up with fellow Northwestern Rangers to play video games during a campus contest in the university’s new esports room in Shockley Hall.

One of the newest teams at Northwestern Oklahoma State University is currently recruiting players and seeking qualified students for its scholarships. That team is esports.

Evan Vaverka, instructor of computer science, is leading the university’s esports team and has been presenting several scholarships to graduating high school seniors as the semester comes to an end.

Esports, which is short for electronic sports, is a form of competition using video games where players participate in organized, multi-player contests or tournaments. Teams compete in games like Call of Duty, Rocket League, League of Legends and Super Smash Brothers Ultimate.

Esports is said to be the world’s fastest-growing sport. In fact, the consulting firm Activate predicted that in 2021, 79 million people in the United States would watch Major League Baseball content, versus 84 million watching esports. And, in 2022, that firm suggests that NFL viewership will be the only sports audience larger than esports.

Vaverka also noted that a high school league named Oklahoma Scholastic Esports had about 37 schools participating during the last school year but this number is expected to increase to more than 75 in the coming year.

Although Northwestern’s new esports team is being organized through the computer science program, it’s open to any Northwestern student interested.

“We aim to be competitive, but I want the whole group to feel like a club that anyone could be part of,” Vaverka said. “Esports players aren’t tied to any specific degree path. I have lots of students that range from biology, business, music, computer science and other majors offered on campus.”

Vaverka said that outside the fact that esports takes place through video games, the players on the team at the university level are expected to act like they would for traditional sports.

“They need to be able to work together, have good communication, practice for different scenarios, to get better individually, and give it their all every time they compete,” Vaverka said.

“Esports players gain the same skills to use outside of the games that traditional sports players get – determination, self-reliance, physical coordination, critical thinking, team building and confidence,” he continued. “While I don’t expect them to play all day, and they shouldn’t because they should be going to class and having a social life, I do expect them to put the practice time in like a traditional sport would expect of them.”

Vaverka is hoping to have an even balance of membership on the team between incoming freshmen and returning students. He’s aiming for 20 to 30 total participants as the team begins competing in the next school year. At this point, Vaverka said he is trying to determine the students’ skill levels with individual games or if they are capable of competing in multiple games.

Vaverka said he still has scholarships available for students interested in competing. Although currently there are no set requirements for receiving the scholarship, he said he expects the students to adhere to requirements set forth by traditional sports like attending class and doing well in them and attending practices and games.

Students interested in learning more about the Northwestern esports team and/or scholarships to compete, contact Vaverka at epvaverka@nwosu.edu, esports@nwosu.du or (580) 327-8587.