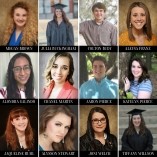 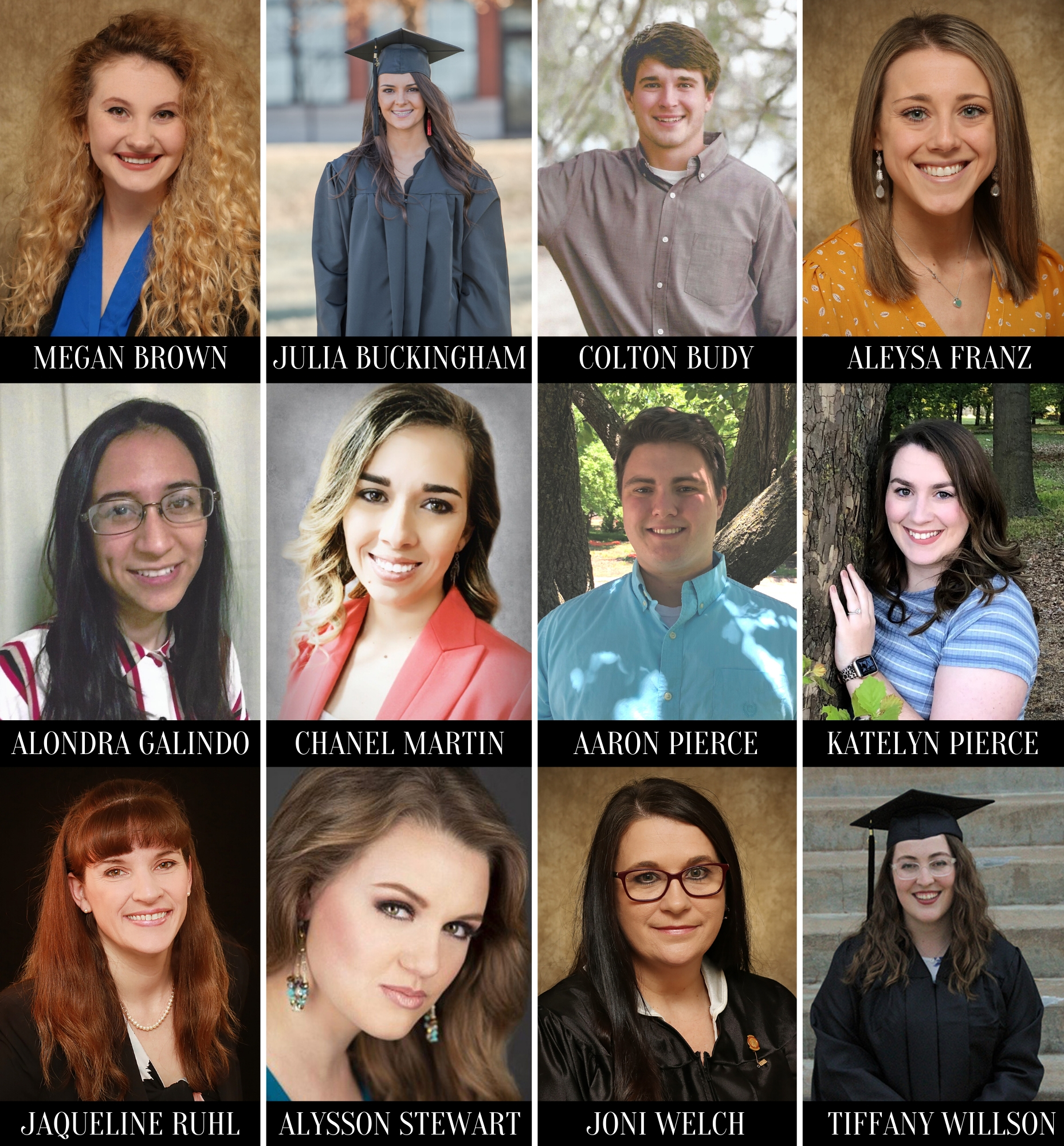 Twelve Northwestern Oklahoma State University graduates have been selected as the 2020 Outstanding Seniors.

This award is sponsored by the Northwestern Foundation & Alumni Association and the Student Government Association to honor outstanding graduating seniors. Recipients must have a minimum cumulative grade point average of 3.5, have completed at least 60 credit hours at Northwestern, never been subject to academic or disciplinary action, be involved in campus and/or community activities and show promise of future achievement.

Chanel Martin, a native of Farwell, Texas, graduated in May with a bachelor’s degree in social work. Her memberships included the Woodward Leadership Advisory Board; Single Parents’ Group, Woodward Campus; the National Association of Social Workers; and Pi Gamma Mu International Honor Society. While a student at Northwestern, she was a volunteer coach, a receptionist, a legal research assistant and a practicum student at Western Plains Youth and Family Services.

Aaron Pierce, a native of Alva, graduated summa cum laude in December 2019 with his bachelor’s degree in music education – vocal. Pierce is certified in vocal/general music for K-12 grades. He was involved in numerous bands and choirs at Northwestern, President’s Leadership Class, Red and Black Scroll Honor Society, and Phi Delta Music Society as vice president. Pierce was a resident assistant and on the President’s Honor Roll. While a student at Northwestern, he served as a band assistant at Alva Public Schools, a student assistant at the J.R. Holder Wellness Center and a student teacher intern of vocal music. Pierce is married to fellow Outstanding Senior, Katelyn Pierce.

Katelyn Pierce, a native of Vici, graduated summa cum laude in December 2019 with her bachelor’s degree in music education – vocal. She is certified in vocal/general music for K-12 grades. Pierce was involved in President’s Leadership Class and President’s Leadership Class as a mentor; Phi Delta Music Society as president; a member and section leader of many bands and choirs; and Red and Black Scroll Honor Society. She was a resident assistant and on the President’s Honor Roll. Pierce served as a choral substitute and assistant at Alva High School, a student assistant for the Northwestern choral department and a student intern of music.

Jacqueline Ruhl, a native of Alva, graduated summa cum laude in December 2019 with her bachelor’s degree in political science. Ruhl plans to pursue law school. She was in the Red and Black Scroll Honor Society; Student Government Association as a senator; Sigma Tau Delta; Pi Gamma Mu; Pi Sigma Alpha; Phi Alpha Theta; Sigma Alpha Pi; and the Leviathan Society. She is an alumna of the National Education for Women’s Leadership. Ruhl was recognized on the President’s and Vice President’s Honor Rolls and as a Newman Civic Fellow in 2019. Ruhl received her associate degree in cosmetology and worked as a delivery driver before attending Northwestern. She interned at a local law office during her time at Northwestern.

Joni Welch, a native of Stigler, graduated in May with her bachelor’s degree in nursing. Welch has been a Licensed Practical Nurse for 16 years. She plans to obtain her nursing practice doctorate and become a nurse educator. She was involved in the Student Nurses Association as a representative and vice president; Oklahoma Nursing Student Association as legislative director; Leadership Northwestern 2020; AHEC Scholars Program; and Red and Black Scroll Honor Society. She was on the President’s and Vice President’s Honor Rolls and was chosen for the Doris Wagner Outstanding Senior and the Nursing Spirit Award. Welch worked as a staff nurse at Share Medical Center while pursuing her degree.

This award is presented to graduating seniors with the highest grade point average.

The recipient demonstrates a dedication to service and a sense of responsibility to the Northwestern Student Learning and Civic Engagement vision, serves as a community service model for other students, possesses exceptional leadership and organizational skills; and exhibits a consistent work ethic and availability.

The recipient serves the university, community and the country; displays school spirit; promotes the university; possesses leadership; participates in organizations; and strives for academic betterment and achievement.

The award is given to a student who has completed the student teaching professional semester. Selections are made on cumulative grade point average and promise of future academic achievement in the field of education.

This award is presented to a student who completed the requirements for a teaching certificate. Criteria for selection include fairness, empathy for all students, a sense of humor and academic achievement.

Students are nominated by their college or university president as inspiring college student leaders who have demonstrated an investment in finding solutions for challenges facing communities throughout the country.

This scholarship award is open to all Northwestern students with a major or minor in the social sciences. It is based upon grade point average, character and needs of the student.

The recipient shows a genuine enthusiasm for people, courage to give of self to others and faith to trust in their honored profession.