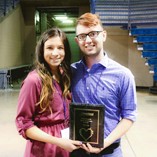 Students from across Oklahoma compete in high school, collegiate and independent developer categories along with competition for the Code Jam Challenge.

The Code Jam Challenge gives participants five days, before the expo, to complete their interpretation of the given topic by designing, developing and implementing an original game. Northwestern’s Code Jam Team consisted of Day, Mount, Larkey and Gardner. The team was awarded “Best Graphics” and “Most Ambitious” for their game, “Glitch,” which was designed to “glorify” the programming bug. Sponsors said the team impressed the spectators by the game play and the overall look of their game along with the kind manner in which they articulated their explanations to show the game was great for all ages to play.

Gardner enjoys being a computer science major and looks forward to the gaming expo and other work that fuels his passion and interests.

“Having the chance to do something like [the expo], to get your mind off of the craziness that is college sometimes, is nice to me,” he said.

Miguel competed as a solo entry for the collegiate level Game Showcase and placed second overall for his game “Garuna War,” which also placed second for the People’s Choice Award.

At last year’s competition, Miguel won best overall for his work. This year, he created the Oklahoma Research Day app that was used for the annual Oklahoma Research Day in March. He will graduate this spring and has been accepted to graduate schools in Europe to continue his education. Miguel believes Northwestern and its Computer Science Program have helped prepare him for his future.

“The competition itself helped me a lot because I could apply many of the studies that we did in class to the game itself,” Miguel said. “Northwestern helped me a lot, especially the faculty because they provided me with the facility and the resources…they could assist me and boost my ambition to not only join competitions like the Heartland expo but other aspects of life as well…I’m really pleased with everything here and all of the time I’ve spent here.”

Carter and Fischer also competed in the Game Showcase category and placed third for their game, “Arcane Towers.”

Bagley was impressed with all of his students’ abilities to not only create the games but to market and promote the games to others, for instance with Carter and Fischer’s project.

“This was their first time to compete and they made a great showing not only in the functionality of their game but also in their showmanship and articulate explanations of the game concepts and mechanics of how to play,” Bagley said. “Carter and Fischer are both juniors and will be back to Northwestern to continue their studies in the fall. We have great hopes of them winning it all at some point in the future.”

Jantz and Marr also showed their game concept of “Shrapnel” in the Game Contest category. Other participants for the expo include Dickenson with his game concept “Floofaloof” that was made for elementary and middle school-aged audiences.