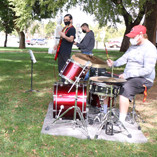 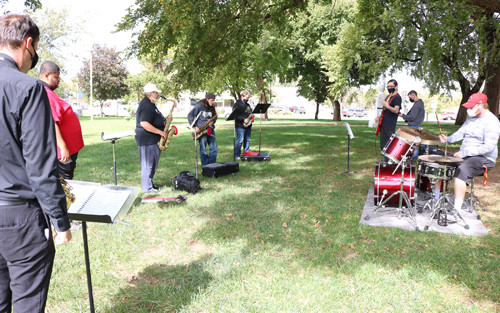 Members of one of the Northwestern Oklahoma State University jazz ensemble combos set to entertain a downtown square audience on Oct. 24 at 2 p.m. rehearses on the lawn of Herod Hall Friday afternoon.

The sounds of jazz music will filter through Alva’s downtown square during the afternoon of Saturday, Oct. 24, thanks to members of the Northwestern Oklahoma State University jazz ensemble.

Guests are welcome to attend the free outdoor event that begins at 2 p.m. and are encouraged to bring their own chairs and blankets to socially distance on the lawn at the Woods County Courthouse bandstand area.

Dr. Seth Cudd, assistant professor of music and director of bands, said that because of COVID-19, the larger ensemble has been broken into four separate combos for the performance.

Alva’s own Max Ridgway, an adjunct instructor of music at Northwestern, will be performing with the student combos, along with special guest John Shell.

Shell also currently plays trumpet with the Old Bulldog Band in the Edmond area. This “vintage rock by vintage players” group – according to their Facebook page – is comprised of graduates of Edmond High School from the 1960s and 1970s, who played and sang in bands back in the day. The group performs classic songs from their junior high and high school days, as well as more current music.

“I’ve known John Shell for many years,” Cudd said. “He’s a fantastic teacher and an impressive jazz artist, and I feel like our students will benefit a great deal from being on the stage with him.”

Cudd said that the four combos will perform some fairly well-known standard jazz tunes, including “Blue Bossa,” “All Blues,” “In a Mellow Tone,” “My Funny Valentine,” “When I Fall in Love,” “Tune Up,” “Maiden Voyage” and one of Shell’s jazz arrangements titled “What Are You Lookin’ At?”

In case of inclement weather, the concert will be postponed.