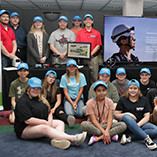 This camp was funded by a grant from the Oklahoma State Regents for Higher Education. Joining Northwestern as hosts of the camp were High Plains Technology Center of Woodward and NextEra Energy, the largest producer of wind and solar power in the nation.

The students were able to see the inside view of an operating nacelle, and experienced simulators and a climbing tower, as well as an operational wind turbine. Students also learned about the generation and use of electricity. They had hands-on experiences with the Microgrid Trainer, a portable training device that includes power generation, micro-inverter, storage and renewable energy technology. The students also built and assembled a wind turbine and learned about solar power.

For more information about Northwestern’s math and computer science department contact Maharry at tjmaharry@nwosu.edu or (580) 327-8583. Additional information about degree programs in STEM fields at Northwestern is available at www.nwosu.edu/school-of-arts-and-sciences/math-and-computer-science and www.nwosu.edu/school-of-arts-and-sciences/natural-science.