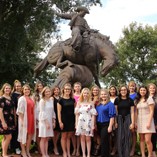 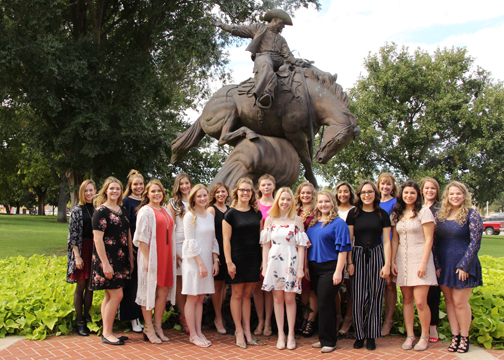 Contestants and their sponsors met with the pageant committee to review all requirements and rules associated with the talent show set for Oct. 24, the pageant itself on Oct. 25, and Northwestern’s homecoming parade on Saturday, Oct. 26.

The contestants had their photos taken for publicity purposes. The committee covered rehearsals, judging criteria, wardrobe requirements and all of the other activities connected with the pageant.

Participants will be assigned jewel groups—Amethyst, Sapphire, Emerald and Ruby— for judging purposes at the upcoming talent rehearsal.

The winner of Miss Cinderella will receive eight semesters of tuition and a one-year room waiver scholarship at Northwestern-Alva.

The first and second runners-up will receive six and four semesters of tuition, respectively.

Third and fourth runners-up will receive a one-year room waiver in addition to the tuition scholarship each contestant already receives.

Each contestant who participates in the Miss Cinderella Pageant automatically receives a one-year tuition scholarship to Northwestern-Alva.

All Miss Cinderella contestants also are a part of the annual homecoming parade that takes place Saturday at 10 a.m. on the downtown square.

To purchase buttons contact Karen Koehn, button sales chair, at (580) 327-7273 or kkoehn@nwtech.edu. Tiffany Misak, Enid administrative assistant at (580) 213-3101, is button sales representative for the Enid campus, while Emmy McNeal, Woodward campus coordinator, can be contacted for buttons in Woodward at (580) 254-2503.