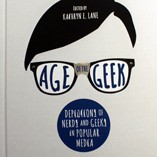 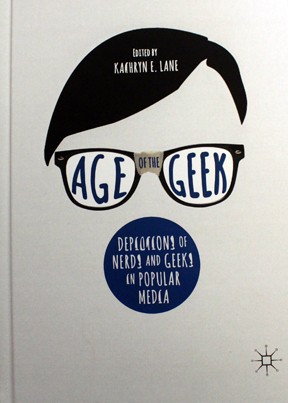 “Age of the Geek: Depictions of Nerds and Geeks in Popular Media,” had more than 60 downloads in its first month as an e-book. It is currently available for purchase on online through Amazon and Palgrave websites as an e-book or for hardcover or rented th

Dr. Kathryn Lane, associate professor of English and chair to the English, Foreign Language and Humanities Department at Northwestern Oklahoma State University, recently created and published a collection of various contributors’ essays titled “Age of the Geek: Depictions of Nerds and Geeks in Popular Medi

Lane has been presenting on the topic for a few years at a conference for the Southwest Popular/American Culture Association (SWPACA), an academic organization that looks at popular culture and its various artifacts that includes everything from written literature – formally published and unpublished like someone’s letters or similar – to television, music, movies, social media, toys, anything that is an artifact of popular culture.

Lane and other Northwestern faculty are members of this organization, which is specific to Oklahoma and the surrounding states in the region. Lane attended her first southwest conference during her first year of teaching at Northwestern. Later, she enquired about adding a new topic area to the conference to provide a positive spin on “the geek in pop culture.”

Lane gives presentations on everything from the popular television shows “The Big Bang Theory” to “Scorpion” and more.

“Looking at television series as cultural artifacts allow scholars to track changes in societal norms,” Lane said. “For example, when looking at ‘Scorpion,’ I’ve presented on the weaponization of genius. In my last analysis of ‘Blindspot,’ I analyzed how the lead character of Jane’s body is seen as public property in the series and what that reflects about the perception of women’s bodies in our current culture. Viewers rarely think of how they’re consuming—and potentially internalizing—their viewing choices, but the reality is that there are very few passive consumers anymore.”

After her third year presenting on this topic, a cultural studies editor from Palgrave MacMillan Publishing approached her to execute a call for papers for a collection about the topic.

“I also had offers from other publishers, but Palgrave was by far the most prestigious and the most academically rigorous,” she said.

In the call for papers process, Lane received many “blind” abstracts, read through each one, then selected the most relevant and in-depth to her topic. She was not aware who wrote what papers on what topics when they were submitted. After the blind abstract selection process and throughout the two-year process of putting together the book, Lane spoke with nearly 20 contributors, who include established scholars, outstanding graduate students, faculty members from other universities in the United States and other countries including Germany and a contributor originally from Brazil.

One blind abstract ironically was selected from Dr. Kathleen Earnest, a Northwestern assistant professor of English.

“I was very pleased,” Earnest said about finding out she was a chosen blind abstract submission. “It was rewarding to be included in such a diverse collection of essays. Researching and writing a paper for this collection provided a break from the usual routines of classroom teaching…Working with Dr. Lane throughout the process was rewarding, also. She was organized and encouraged contributors to stay on target for deadlines.”

Earnest’s writing is titled “Changing Faces: Exploring Depictions of Geeks in Various Texts,” and she aims for readers to see a more complex depiction of geeks or nerds, other than the typically humorous portrayals seen in pop culture media. Earnest discovered an older definition of what it meant to be a “geek” and described the person as a carnival performer who might do bizarre things to attract an audience, “such as bite the head off a chicken.” Earnest’s writing was inspired by Jon Katz’s book “Geeks: How Two Lost Boys Rode the Internet Out of Idaho,” and television characters such as Patrick Jane in “The Mentalist,” Sherlock Holmes in “Elementary,” and Mr. Finch and John Reese in “Person of Interest,” which she believes the characters were portrayed as very bright individuals who employed rather outrageous techniques to solve crimes.

“I chose this topic because I wanted to look at a contrasting depiction of the nerd or geek in popular media,” Earnest said. “I had presented at panels on this topic at SWPACA conferences in Albuquerque, New Mexico.”

Once Lane had all of her contributors’ abstracts selected, it was time for the process of merging, organizing and summarizing the content of the book. She also submitted three proposals for the book, which led to its precise tone of balance between a conversational tone and academic content. The book is described as examining the nerd and/or geek stereotype in popular culture today. Utilizing media—film, TV, YouTube, Twitter, fiction—that often defines daily lives, the contributors interrogate what it means to be labeled a “nerd” or “geek.”

“I wrote the introduction and conclusion to the collection,” Lane said. “It took a massive amount of research to do that. Of course serving as the editor I needed to be very knowledgeable about the field, in general, so I could check my contributors or make sure something was coming across as clearly as possible – an enormous amount of research and writing and rewriting went into this.

“So it was really an academically rigorous approach to what many people consider an easily dismissed area of study, but our scholarship is really solid.

“Shannon Leaper [research and instructional services librarian and assistant professor of library and information services at Northwestern] was instrumental with helping me with my research, and there are a number of people who helped me. Dr. Jenny Sattler [assistant professor of physics], Dr. Mary Riegel [assistant professor of mathematics], and Leaper, all read drafts, gave feedback and helped with visuals just to get another pair of eyes on it because when you’re the editor, you want someone to be honest. I needed somebody who wasn’t worried I was going to pull their piece or something.”

Lane believes the book brings new light through the various forms of research and perspective for the reader about the common depictions of nerds and geeks.

“I think one of the things I find most interesting about the book is the interdisciplinary nature of it, like the quantitative Twitter study and an auto-ethnographic piece being side by side in the book. The different perspectives are important, too, because having international contributors, the way they perceive those terms of ‘geek’ and ‘nerd’ are also filtered through another layer of culture.”

She ensured each contributor’s collection was double-peer-reviewed along with the manuscript that also was blindly reviewed an additional four times by the publishing company.

As demanding as this project was for Lane to work on alongside her daily responsibilities as department chair, teaching classes and advising students, she persevered for the opportunity.

“I’ll be honest, the only way I finished this is that I worked like a crazy person every summer and on holiday breaks,” she said. “I don’t know if I would’ve pursued publishing in this area except that Palgrave came to me because they were interested in my titles, they looked me up via SWPACA and the things I’ve done there, so when that falls into your lap it’s like, ‘oh okay, yeah, I’m going to do this,’ because how do you not? It was challenging.”

Lane also believes her topic and being a part of the pop culture organization has had a positive influence on her teaching at Northwestern.

She also has advice for students, faculty and community members who are looking to pursuing publishing.

“Accept that you will rewrite,” Lane said adding that her introduction had a solid, four distinct versions that were completely different at some point and experienced the same thing with her conclusion. She also noted that all of her contributors ended up rewriting something if not all of their essays.

“You want it to be a product that you’re proud of,” Lane said. “It’s the same thing I tell my freshmen. I think it works across the board, and everyone gets busy, and they’re like ‘oh, it’ll be okay; yeah, you turn in a bad paper, oh, there were typos - oh whatever,’ but this is posterity, right? My professional reputation is on the line. I now have an Amazon page and that’s crazy to me.”

So, does Lane consider herself a geek or nerd?

“Age of the Geek: Depictions of Nerds and Geeks in Popular Media” is currently available on eBook format or hardback on Amazon.com and Palgrave.com for $80. Lane also donated a copy to the Northwestern library. The book was released in only eBook format earlier this fall and within its first month it was downloaded more than 60 times.

“After that it was obvious to my publisher that there is a need for this,” she said.

Next year the book will be available for purchase in paperback form.