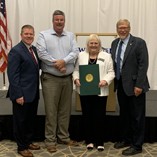 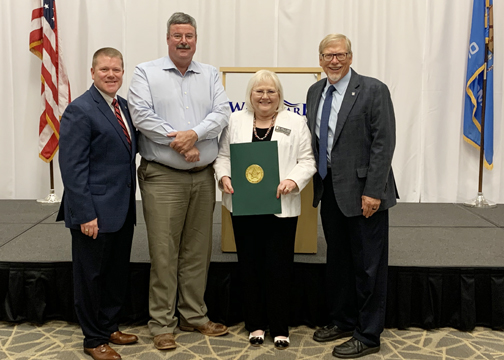 Dr. Deena Fisher recently was honored with an appointment to Dean Emeritus of the Woodward campus. She is pictured with the entire panel who came to speak at the Woodward Chamber meeting June 8. (Left to Right) Rep. Mike Sanders, Sen. Casey Murdock, Fisher and Rep. Carl Newton.

Dr. Deena Fisher, professor of history and dean of the Northwestern Oklahoma State University Woodward campus who is retiring at the end of June, has been conferred the title of Professor Emeritus and Dean Emeritus by the Regional University System of Oklahoma Board of Regents.

The emeritus title may be bestowed on retired professors and administrative officers who are specially recommended to the board by university president Dr. Janet Cunningham in recognition of exemplary service to the university. Nominated individuals who are approved by the board receive a copy of the resolution.

On June 8 at the Woodward Chamber meeting, Oklahoma Rep. Carl Newton (District 58) awarded Fisher with the appointment of Dean Emeritus of the Woodward campus and Professor Emeritus of History at Northwestern.

“Dr. Fisher has been instrumental in the success of our Woodward campus,” Cunningham said. “She creates an environment where students thrive under her direction and has been a great mentor to those around her. We will miss her being on campus, but are excited for her future endeavors.”

For more than 20 years, Fisher has provided outstanding leadership at Northwestern.

The strongest component of Fisher’s leadership ability is to help others become better leaders through her guidance and direction. Fisher has been a very visible, external advocate for both Northwestern and the Woodward community.

In her community, she is an active board member of the United Fund, Friends of Historic Fort Supply serving as vice president, Plains Indians and Pioneers Museum (past president), William S. Key Correctional Institution Citizen Advisory Board, and Woodward Industrial Foundation Advisory Board. She is a past chair of the Woodward Chamber of Commerce. In 2009, Fisher was recognized as the “Woodward Citizen of the Year.” As an active member of Rotary International, she currently serves as past president of her club and current district governor nominee. She has been an active member of Delta Kappa Gamma Psi Chapter for 25 years and P.E.O for 10 years.

“I’m deeply appreciative of this honor,” Fisher said. “Northwestern Oklahoma State University has been my home for the past 24 years. The emeritus status makes it my home for life.”

She holds a doctorate in higher education administration from Oklahoma State University and master’s degrees in social science education as well as school counseling from Southwestern Oklahoma State University. In 2006, Fisher attended the “Institute for Management and Leadership in Higher Education” at Harvard Graduate School of Education. She is a contributing editor for the textbook “Oklahoma—Land of Contrast.” In 2012, Fisher was inducted into the Journal Record Woman of the Year’s “Circle of Excellence.” She is a proud graduate of the Leadership Oklahoma Class of XXIV.

The Northwestern Foundation and Alumni Association staff will host a reception for Fisher and other retirees this fall semester.