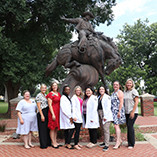 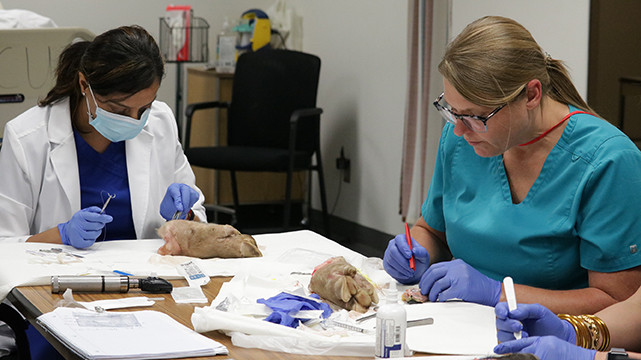 Twelve students in the Bachelor of Science in Nursing to Doctor of Nursing Practice (BSN-to-DNP) program at Northwestern Oklahoma State University spent six days on the Alva campus for residency week July 10-15.

The students are involved in what is called a hybrid program meaning that much of their education is completed online. The students can complete work in clinics in their hometowns while the Northwestern faculty members supervise remotely. For residency week, the students come to the Alva campus for the week for hands-on training and to show that they are competent in physically assessing patients.

“While they are here, we also introduce them to some procedural basics such as suturing,” explained Dr. Courtney Ballina, who serves as the Wisdom Family Foundation Doctoral Program for Rural Nursing Practice Doctor of Nursing Practice program director.

Joining Ballina to provide instruction to the group during the week was Dr. Latesha Reed, assistant professor of nursing.

Ballina added that physical therapists from Northwest Physical Therapy and Sports Rehab of Alva visited with the students while they were here to teach them how to do more advanced musculoskeletal tests, and Gina Stafford from the Oklahoma Board of Nursing gave a talk on the rules and regulations of advanced practice RNs in Oklahoma. Also, several young children volunteered as patients for the students as did adult males and females who received physicals. Females also volunteered for well-woman exams.

“But most importantly, residency week offers our students a chance to bond with each other and support each other through the remaining two years of their program,” Ballina said.

The group that attended residency week this time won’t return to the Alva campus again until they graduate two years from now. Each group that walks in the May graduation ceremony has a summer semester remaining and won’t be fully finished until they return in July to complete their poster presentations.

“This is definitely one of my most favorite times of the year,” Ballina said. “I spend a lot of time getting to know them individually through the summer via Zoom due to the nature of the assessment course. Then, when they come to residency, I already have a sense of who they are and how they learn best. It is like they blossom right in front of my eyes! Watching their confidence grow throughout the week both as NP students as well as socially within their cohort is really cool to watch. By the time they leave, not only do they know how to do what they were trained to do, but they also form a strong bond with each other, which seems to be critical to their success for the remainder of the program.”

The BSN-to-DNP program enrolled its first class in August 2017. The fourth class to have graduated did so this year in May and will test at the end of the summer or in the fall. So far, the program boasts a 100 percent certification pass rate and a 100 percent employment rate.

Northwestern is one of only two public universities in Oklahoma to offer a Family Nurse Practitioner program, was the first public university with a BSN-to-DNP offering, and is the only program in the state with an emphasis on nursing in rural communities.

This program also was recently named the best in the country out of 203 accredited colleges and universities in the nation evaluated by Intelligent.com.

Instruction within this program helps to prepare DNPs to become certified Family Nurse Practitioners in their home communities and surrounding areas without first earning a master’s degree; however, there is an advanced placement option for students who have already completed a master’s degree in nursing.

Additional information about the DNP program may be found online at www.nwosu.edu/graduate-studies/bsn-to-dnp or by calling (580) 327-8442.