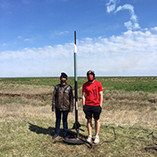 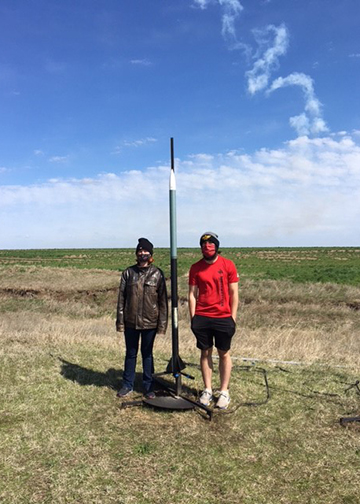 Sharon Boeckman (left) and Chris Chauncey (right) show off their 6’9” rocket for the Northwestern Ranger Rocketry team who competed in the Argonia Cup Collegiate Rocketry competition near Argonia, Kansas, recently.

Members of the Northwestern Oklahoma State University Ranger Rocketry team competed alongside 15 other teams from 13 universities during the fourth Argonia Cup Collegiate Rocketry competition March 27-28 at the Rocket Pasture near Argonia, Kansas.

Dr. Steve Maier, chair of the department of natural science, professor of physics and co-sponsor of the team, is proud of the students.

“The team made great strides this year, and it was a pleasure working with them,” Maier said. “They gained experience testing ejection charges, using sets of sheering pins properly for separate ejection charges and successfully using multiple onboard GPS trackers. The 3D printed payload bay and weathervaning glider were robust and well designed. I am proud of the work done and the commitment of each member of the team.”

According to the Argonia Cup website, its mission is “to provide a competition that challenges teams of collegiate students to design, construct and execute a multi-disciplined rocketry project utilizing innovative engineering and technology concepts.”

This year’s competition challenge was to fly a rocket to an altitude of at least 8,000 feet using a Level 2 motor then recover it at a predetermined location.

Maier explained that the Ranger rocket was 2.56 inches in diameter and stood 6’9” tall. It was designed to fly to an altitude of 8,600 feet before deploying a glider to return a golf ball near the launch site.

“We flew our competition rocket ‘Alpha’ on Saturday,” Maier said “The ejection charge from the motor detonated early (before the rocket reached its peak). This caused damage when the body tube separated. Due to the nature of that separation, the primary parachute opened early, which caused the rocket to drift much farther away than planned (it was supposed to fall in tumble recovery for a while to prevent drifting).

Maier said the altimeter indicated that the rocket did not achieve 8,000 feet in altitude (due to the motor ejection charge detonating early). This year, Team RRRocket did not post a qualifying flight to earn a prize award, and placed 11th overall.

“Motor ejection charges come with the motor and have a history of not always detonating at the correct time,” Maier said. “Moving forward for next year, we have a solution for that issue.”

The team video is available to view at https://www.youtube.com/watch?v=6431OuRaFtc. The video was produced by Dr. Luis Antunes Rocha, assistant professor of mass communication.

“I enjoyed brainstorming with the team,” Chauncey said. “We had to find a way to get the payload to the location at the launch site and decide to start from scratch or use a prior year’s rocket for our rocket construction.”

To learn more about Northwestern’s Department of Natural Science or the Ranger Rocketry team, contact Maier at (580) 327-8662 or sjmaier@nwosu.edu.