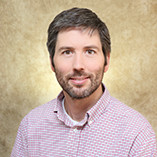 Dr. Matthew Lambert, who teaches courses in American literature at Northwestern Oklahoma State University as an assistant professor of English, has published “The Green Depression: American Ecoliterature in the 1930s and 1940s” through University Press of Mississippi.

His work has appeared in the Journal of the Midwest Modern Language Association and Journal of Popular Film and Television.

His book is a critical analysis of the often-understudied environmentalist literature of the mid-20th century.

Lambert said “The Green Depression” focuses on the importance of environmental issues and thought in the work of American literature (and some films) from the late 1920s through the 1940s. Not only does the book examine the impact that the Great Mississippi Flood of 1927, the Dust Bowl, and the use of atom bombs had on American literature and culture, it also examines literary depictions of other environmental issues--including the eradication of wolves and other nonhuman predators; urban segregation, overcrowding and pollution; and unsustainable agricultural practices. Ultimately, the book argues that depression-era authors, filmmakers, and conservationists helped contribute to the development of modern environmentalist thought, which emerged in the early 1960s.

Lambert said writers of the time provided a better understanding of the devastating effects that humans can have on the environment. They also depicted the ecological and cultural value of nonhuman nature, including animal “predators” and “pests.” Finally, they laid the groundwork for “environmental justice” by focusing on the social effects of environmental exploitation.

Lambert said the scope of the project was a bit daunting.

“I tried to incorporate readings of as many novels as I could find that contained environmental ideas and themes,” Lambert said. “Trying to put all of these works in conversation with each other was sometimes difficult.”

Three of the chapters in the book focus on a different geographical landscape--the wild, rural, and the urban--while the last chapter focuses on technology and science fiction.

“Understanding and covering the unique environmental issues associated with each of these topics took a long time,” Lambert said.

The book also builds upon a growing body of scholarship in ecocriticism that describes the unique contributions African American and other nonwhite authors have made to the environmental justice movement and understanding of the natural world.

Scott Slovic, coeditor of “Ecocritical Aesthetics: Language, Beauty, and the Environment,” said this of Lambert’s book:

“Many of the important authors considered in this study—Nelson Algren, Tillie Olsen, James T. Farrell, and Richard Wright, to name a few—have received insufficient attention from ecocritics, and yet, as Matthew M. Lambert shows in ‘The Green Depression,’ their work and other writing during the Depression and the World War II eras is profoundly relevant to the roots of contemporary environmentalism that emerged during the latter half of the 20th century.”

Lambert said there were a few things that inspired the book.

“I'm generally interested in the way that literary and other cultural works (films, music, etc.) depict nature and environmental thought, and depression-era literature seemed like a topic that critics had largely ignored,” he explained. “Also, my father showed me a picture of my grandfather in a Civilian Conservation Corps (CCC) camp during the 1930s. This spurred my interest in some of the environmental impacts of Franklin Roosevelt's New Deal programs.

“I've also been interested in learning more about the Dust Bowl since I first read John Steinbeck's ‘The Grapes of Wrath’ back in high school.”

While writing the book Lambert said he developed a better understanding of the 1930s and 40s as an important historical moment in the development of the environmental movement. He also learned more about the intersection of environmental and social issues (e.g. racial, economic, and gender inequality).

“I was surprised at how easy it was to find a wide range of literary responses to the environmental issues of the time,” Lambert said. “Especially since many of the novels I address in the book are not often associated with environmental thought.”

Lambert’s book can be checked out at Northwestern’s library and is available for purchase on Amazon.