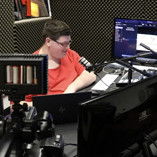 This statewide competition took submissions from all colleges in Oklahoma. NWTV7 placed in three different events.

“I couldn’t have done it without the group of people helping run the broadcast,” Kennedy said. “I’m proud that we won the awards that we did.”

The KNSU Radio station room has three studio production rooms, each with TV monitors with Apple Mac computers. In the main studio room, there is a soundboard to control the microphone volumes and different soundbites, a video switcher to control the cameras that stream the shows, three condenser microphones for streaming and recording multiple hosts and guests, as well as light boxes and detail lights. In the other two studio rooms, there is a TV monitor with Apple Mac computers and a microphone to be able to record podcasts.

Each week throughout the semester, the Broadcast Practicum class creates a newscast in the Control Room in Jesse Dunn. Each student gathers footage and interviews from people about events happening on campus and makes them into a video package to present on the newscast. They have a designated anchor, teleprompter, video producer, control board director, soundboard producer, and a script manager.

“The students were very professional, and they created high-quality content,” Antunes said. “Their content was well edited, well shot, and they did great with their voice in front of the camera. I’m very proud of them, especially with it being some of their first times getting experience like this.”