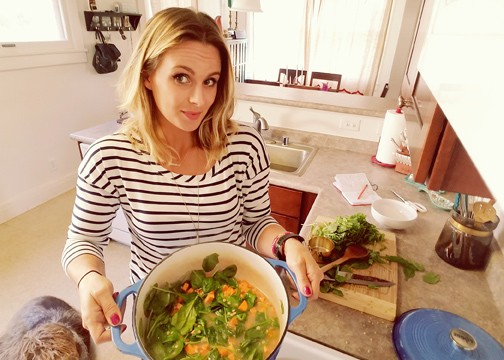 Amy Pottinger found Northwestern Oklahoma State University when her husband Patrick was attending pilot training at Vance Air Force Base in Enid. The 2010 graduate is now spreading her own wings as one of 12 finalists on the competition television series “Food Network Star.”

Pottinger, who earned a Bachelor of Science degree in elementary education, will begin appearing on the program Sunday, June 4, at 8 p.m. on the Food Network.

The Seattle, Washington, native said she has always enjoyed cooking for friends and family but when she was about 19, she started to realize how creative and meaningful food could be. She has worked in a number of restaurants through the years and started a food blog – www.caviarandcrayons.com – in 2014.

Pottinger, an avid reader and painter to go along with her love of cooking, explained that she had applied to Food Network Star a few times, never dreaming they would actually pick her for the show. She said the process was different for some as a few were contacted by the Food Network and others, such as herself, applied through casting. She said they all went through a series of interviews until they decided on the 12 competitors for the Season 13 cast.

Taping for the show ended earlier this year, so the Star hopeful has had a few secrets to keep including how well she did on the show.

“The suspense of who gets their own TV show at the end is part of the appeal, but it was an amazing experience,” Pottinger said. “There were some incredible guest judges, and we did some crazy stuff. I will say, it is not as easy as it looks. I went in thinking, ‘I cook well and am used to multi-tasking.’ It is tougher than it looks, for sure.”

The description for the June 4 season premiere notes that the 12 Stars will arrive at the Orpheum Theater in downtown Los Angeles hoping for their big break. The group is greeted by the show’s hosts to learn they have to pass one more audition before officially being considered as finalists. They also learn that the winner of “Food Network Star: Comeback Kitchen” will be joining the competition.

Others in the TV show contest include individuals with culinary school backgrounds, other food bloggers, a school cafeteria cooking manager, the King of Louisiana seafood and a winner from the network’s program “Cutthroat Kitchen.”

Pottinger has provided more information about herself on her blog, including various links to interviews and articles prepared by the Food Network and magazine about each contestant including the fact her dream show would be named “Amy’s Crazy Kitchen,” where food bloggers and home cooks would join her in the kitchen while she makes delectable dishes.

The stay-at-home mom of two young children explained that her cooking style comes from the bits of pieces of who she is, the places their family has lived and the people they have met through the years. She said by visiting her food blog one hopefully can see those influences through the variety of the recipes she shares.

Currently living in Honolulu, Hawaii, where her husband now flies the F22 Raptor, Pottinger explained that right after her graduation from Northwestern, she moved with her family to Florida where she was offered multiple job positions in the Bay County School District. She accepted a position teaching kindergarten.

“Halfway through the year, the assistant principal told me she was so impressed she wanted to move me to fifth grade,” Pottinger said. “Unfortunately, we were moving that coming summer to Alaska.”

She did some substitute teaching in Alaska while waiting on the arrival of their first child.

“I was fortunate to have some amazing professors (at Northwestern),” she added about her experiences while taking classes at the Enid location. “Elementary education also has equipped me to understand my children better, how to teach them and their social/psychological development.”

Pottinger isn’t finished with her education, although this time she’s continuing with her passion of cooking by attending the Gros Bonnet Culinary Academy in Honolulu – a dream only strengthened by her experiences on Food Network Star.

“It’s something I have thought about in the past, but when someone like Bobby Flay or Giada De Laurentiis compliments your food and tells you that you belong with this group of people – people who have restaurants, national awards and a culinary pedigree – you want to do whatever you can to keep that ball rolling,” Pottinger said. “Star may launch a public career for me, it may not, but know that I want to do something with food. And although I have an incredible natural ability, formal training is important for the type of job I would hope to have.”