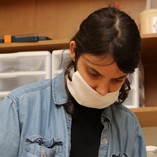 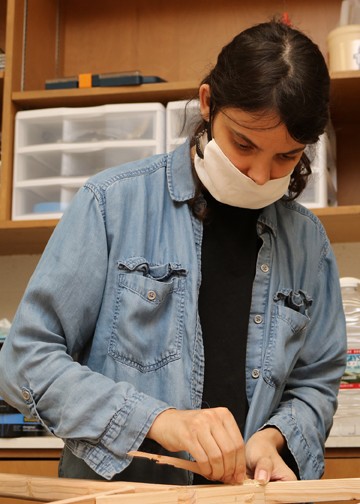 Ania Garcia works in the Jesse Dunn Art Annex studio at Northwestern in preparation for three workshops this month and an exhibition of her work during the First Friday Artwalk in October. 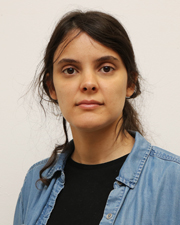 Three workshops are planned this month by Cuban-born installation and video artist Ania Garcia who is serving as the September Artist-in-Residence within the Northwestern Oklahoma State University visual arts program.

Beginning Monday, Sept. 14, in Jesse Dunn 324 from 8-9:30 p.m. and continuing the next two consecutive Monday nights, Sept. 21 and 28, the workshops will focus on experimental drawing and sculpture processes. They will be composed of three modules called: “Crazy Stone,” “Psychasthenia and Negotiation” and “The Will of Making Your Own Space.” These sessions are open to students, faculty, staff and community members but are limited to 15 attendees each. Contact Kyle Larson, assistant professor of art, at krlarson@nwosu.edu to reserve a spot.

Additionally, the work that Garcia produces while on campus will be presented during the Alva First Friday Artwalk on Oct. 2.

Garcia started her career as a printmaker, working at the “Taller de Gráfica de La Habana” in Cuba and at “Aguafuerte Taller” in Santiago de Chile. She then expanded the fundamental elements of her practice into three-dimensional and digital materials, incorporating some of the logic that came from her printmaking practice.

“Lately, I have been representing and distorting daily life situations,” Garcia said. “I isolate ordinary gestures that torn apart become pieces of an imaginary else. These scenarios are usually related to mass production systems, denaturalization of domestic objects and repetition of logical operations. I use geometry to generate situations of order and observation of behavioral structures.

“As part of my art practice I collect videos of people performing simple tasks, some I recorded myself and others I found online. I interview people about how they move their body while doing their jobs and how a repetitive task changes them. I have recently been interrupting people’s meals to ask them to recreate an activity, using the food and the cutlery around.

“When I am working on my own I incorporate some of the elements observed in the collected documentation. Usually there is a suspicious aura behind the apparent experience of the events naturalized in the space. The physical materials I use are not the right ones, there is something off in the installation itself, but there is definitely the sense of an arbitrary rational setting that can produce a sense of satisfaction and exploitation at the same time. From the interpretations of my environment, the amalgamation of gestures and materials, the position of both the camera and the viewer, there is a broiling of signs that made me confront the limitations on - how I can tell and justify what is happening inside and outside of the artwork.”

Garcia’s artwork may be viewed at www.mamilia-groff.com.

Northwestern’s Artist-in-Residence program was established in January 2014 to invite emerging and established artists to come to the Alva campus to work with visual arts students weekly, provide workshops and lectures for the community and have a culminating show of the work they produce while here.

To learn more about the program or to view past residents, please visit www.nwosuair.com.