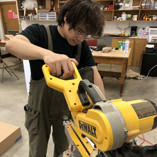 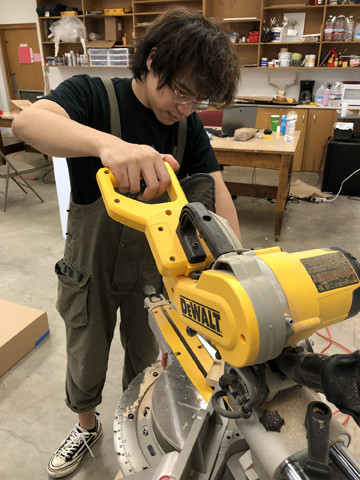 Northwestern visual arts program artist-in-residence for November Chang Wu is busily preparing artwork for his exhibition on campus on Dec. 4. He’ll present a talk and free workshop in the Student Center Ballroom on Dec. 3.

Northwestern Oklahoma State University visual arts program artist-in-residence for November is Chinese artist Chang Wu. He will conduct an Artist Talk discussing his work and influences on Thursday, Dec. 3, from 12:30 - 1:30 p.m. in the Student Center Ballroom with a workshop following titled “Superposition: Tools in Progress” from 1:45 - 4 p.m.

Wu’s workshop will show artists' interpretation and manipulation of tools in their practical behaviors under the current instrumentalist rules. This course will require participants to bring a daily object and give a short performance of fewer than three minutes.

Both the talk and workshop are free and open to the public; however, the space is limited, and workshop participants must RSVP by contacting Kyle Larson, associate professor of art, at (580) 327-8108 or krlarson@nwosu.edu.

Wu is an installation and video artist and has exhibited in both China and the United States. Born in Wenzhou, China, Chang graduated with a Bachelor of Arts degree from China Academy of Art in 2014. After graduating, he worked in the landscape design industry.

Gradually feeling the limitations of design in his job, he turned to art. After several exhibitions and lectures in China, he was given a curatorial opportunity for the 2017 LA Art Show, Shanghai area. This experience made him realize the weakness of his aesthetic logic, so he came to the U.S. in 2018 to further his studies in sculpture at Boston University where he earned a Master of Fine Arts degree in 2020.

Some of the mechanisms that he used in landscape design he incorporates into his art practice with an emphasis on material language, the idea of Genius Loci and the concept composition relation. His work focuses on the subordination as well as the context in which it stands.

Wu said the communication difficulties he experienced when he first came to the U.S. made him interested in language logics, and the confrontation of two very contrasting languages made him regard language as a tool, something he realized had a physical and ideological impact on himself and his work.

“My works are often given improper functions: the relationship is reversed, the separation and refusion of form and content,” Wu said. “In my work, the relationship between people and tools, sound and image is often reversed. This makes the imperceptible sense of incongruity exaggerated and alienated into a sense of strangeness and distance, which is different from daily life, presented in front of the audience. This discordance comes from the division of space.

“Since I came to the U.S., the difficulty of communication has made me interested in the rules of language. By incorporating languages in other media into the language system that we know, I try to grasp the logic of language. Through this back and forth transformation between language and other language form, words constantly change qualitatively; the context in which it is located become obvious, so as to take this as an entry point, I can continue to explore the possibility of image language. Initially unambiguous meanings of words are shattered. At that moment, lots of ambiguities and indistinctnesses, which are inherent to the phenomenon, come to the surface. Languages are dissociated from their original meaning, by which the system in which they normally function is exposed.

“My artworks focus on the inability of communication, which is used to visualize language, the attempt of dialogue, the dissonance between form and content and the extension of language. By investigating language on a meta-level, I try to create works in which the actual events are still taking place: events evocative of atmosphere and suspense that are not based on a narrative thread.

To learn more about the artist-in-residence program or visual arts at Northwestern, contact Larson.